A Dwarfs Tale: From King to Clansman. Part III - Warriors

So, I have finished my warrior unit.  I actually had these done last weekend but a change of shift at work (had to work 6-2, then this coming week back on to 2-10 and then back to... etc) meant that I was lazy.  I am not happy with the banner, but I'll discuss that after the pictures.  Here: 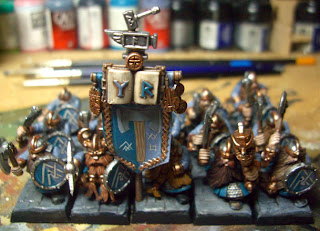 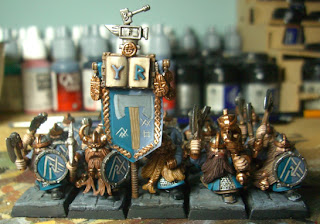 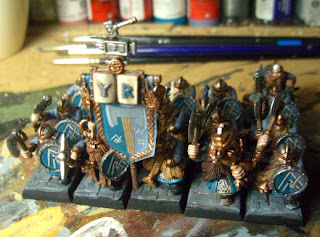 Right then.  What don't I like?  The banner.  I just couldn't get the axe right and so to me it looks quite childish and flat.  So, I have been reluctant to show that.  Now I don't care that much and instead am just concentrating on the next set of tasks to do.  I am aware the pictures aren't that good, they were taken quickly but there isn't much to see.  I was quite happy with the unit until the banner icon went on.  The champion - to the left of the banner - has a bronze helmet and horns.  Something I am planning on keeping for the army; champions have bronze and an helmet adornment of some form.  The musician is OK, it actually turned out quite good.

For the top of the banner I went for the aged book look - again it is almost impossible to see - and it turned out OK.  I think I have a new method for my metallics, need to try it again, if so it works well and looks good.  It is basically Vallejo smoke ink and badab black wash.  It seemed to look better than just plain black to me.

My next project is the cannon.  I intend to add it to some form of base, being as now I don't have to worry about minimising the number of attackers.  I need to check the sizes and such to see what it would look good on, and what would fit it all.  I also am going to pick up some more old dwarf shields.  For £20 I should get enough to do about 4x20 dwarfs.  I have realised that I am not doing much converting - mainly because dwarfs don't lend themselves well to it - and might have to try a bit more on some of the stuff.  I have upped the number of units I am doing in this "batch" to include an organ gun and a thane.  I am trying to start going through my armies in this manner.  Painting some stuff and then move on to the next.  Will see how it goes.

One thing I have noticed is that I am rushing.  When painting my warriors I didn't care about some bits or pieces.  I feel this is to "please" folks online.  This is not suiting me though.  So, now I am going to work at my speed and hopefully pull out some better looking dwarf minis in the future.
by Kuffeh At 3:12 pm 4 comments: Links to this post

Well, I am sure you'll all have noticed that I have not posted much, this last week I have not had any internet access; a slight problem with our connection.  This has now been finished, as you might have gathered.  What have I been up to?

I now have a job, finally.  Working in a warehouse making plastic items, it isn't a bad job.  I have shift work though, so for this week I am on earlies (6am-2pm) and next week I will switch to lates (2pm-10pm) and then back again etc.  This does mean that I will only be able to get a game in ever other week, which sucks but is better than nothing.  For some reason the guys at the group believes me to be a 'rules guru', and keep asking me questions.  It is odd considering that I have probably played less games than they have. But is quite cool still. =D  Life down in the south is quite cool.  It is a nice place, I have been to Canterbury a couple of times, it is pretty and the local area matches it.  I am yet to make many friends down here but I am working on it.  Other than this I am getting on with painting, along with playing on the X-Box some.  I have recently finally picked up Red Dead Redemption and Final Fantasy XIII.  I am yet to play RDR but I will do.  It looks fun.  I am not a huge fan of the GTA series but this is different.  It's COWBOYS.  I am loving FF13 so far, but the combat system is getting some use to.

Well.  Painting wise I have finished my 16 warriors, hopefully getting pictures up tomorrow or later today.  I will discuss these more in detail there.  I have now also undercoated my cannon and crew, these will be going on a base of some kind.  I have also planned out small lists for various projects I want to do.  One of these is to touch up my orks, mainly add some detail work to them.  The problem is that when the squads gets close it can be rather hard to spot who is with who if they are all similarly armed - ie 2 slugga or shoota squads next to one another.  So, my plan is to go back and add some form of squad identifier to them.  Something like different coloured dags or checks on shoulders or cloth etc.  Something obvious that can be spotted in the confusion of melee and so forth.

And talking of orks.  I got an actual game with them yesterday.  Yes.  A game!  My first one at this gaming group and first since the beginning of August.  This was Capture and Control against a Chaos Marine force.  He had; 2 squads of berzerkers, one had Kharn leading it.  A small squad of plague marines.All mounted in rhinos  Two obliterators, a vindicator and a daemon prince with.... yes.  Lash.  In return I flooded the board with green.  This was pretty much all I have painted.  2x 20 shootas. 2x 12 sluggas in trukks, 8 nobs and a warboss, 2x rokkit trakks. And 13 lootas.

His objective was pretty much centre of his deployment, mine was kept back and aptly was placed in an ork village.  I won't go blow by blow, but it was very close.  Some highlights were my nob squad and his kharn led 'zerkers battering each to hell before kharn got smooshed.  His daemon prince charging my 20 boy squad alone, killing a few before getting charged by the warboss and remaining nob.  Who then caused only a few wounds with their claws before the weight of 20+ boyz attacks pounded him into mangled flesh.  The game stood on a knife edge as to whether I could contest his objective or not.  Mine was safe.  He was left with only a obliterator and a handful of plague marines to defend it.  I struggled to find units big enough to weather the storm and in the end we had a trukk and a trakk sat on it.  He JUST managed to take out both and stop a small squad of boys (at this point about four left) from sneaking onto it in the final turn.  It was great fun and very close.

Looking at it, I have learnt that the orks are OK in combat.  They win by virtue of weight of attacks, not hard hitting ones.  And they HAVE to assault to do damage.  I2 and S3 is not the best combination in tandem with a 6+ save.  The nobz are pretty good, they hit hard and have lots of attacks.  I need to be a bit more thrifty with the wargear options for them to make the most out of wound allocation.  The warboss performed OK, fluffed a fair few of his attacks though.  The lootas performed well as usual, getting some nice shots off and making the daemon prince keep his head down.  I also need to be more careful with the placement of my transports.  Two out of the three - including the nobz trukk - got taken care of quite quickly.  The last, I should have really tried to keep it hidden so I could have gone for a last turn boost for their objective.  Otherwise, I think it went OK.  I need more practice, but it was rather enjoyable.  I am considering next time, dropping three lootas and taking a single suicidal deffkotta with rokkits for outflanking and pot shots at vehicles.

Finally, I think I might need to get a new carry case.  the one I have at the moment is good - A figures in Comfort case - but is rather soft and I fear the layers get knocked about a bit and in turn I have many orcs with broken arms or have come off the bases.  This will depend on money and so forth, but hopefully in the future I can see about this.
by Kuffeh At 8:51 pm 2 comments: Links to this post

A Dwarfs Tale: From King to Clansman. Part II - The Basics

So, picking up from where I left off – The New Army.  I decided a while ago that I wanted to make them stand out, to be MY dwarfs.  With this in mind, I went about looking for a good colour scheme.  I didn’t want to do the typical colours, which for dwarfs are red, white, blue and green.  Usually it is white and…  this I did not want.  I wanted a scheme that stood out, but did not call in the Gay Pride Parade with its choice of colours.  I did originally do about five dwarfs in a light grey and light blue scheme, but it just didn’t seem to suit them.  In my opinion, I have always found that dwarfs look better in darker colours; which is why the 6th ed GW scheme of Dark Angels Green and Brown worked really well.  It had an earthy feel about it.  I wanted my dwarfs to have some of this feel without them falling into the ‘typical looking’ dwarf army trap.  I believe I have achieved this.
<< Click to read more >>
by Kuffeh At 9:32 pm 2 comments: Links to this post