As you might know I have recently decided to pick up the LOTR:SBG and so this is my review of the game.  I will start off with my thoughts on the LOTR boxed set - "The Mines of Moria", and then move on to the rules of the game itself.
<< Click to read more >>
by Kuffeh At 12:35 am 5 comments: Links to this post 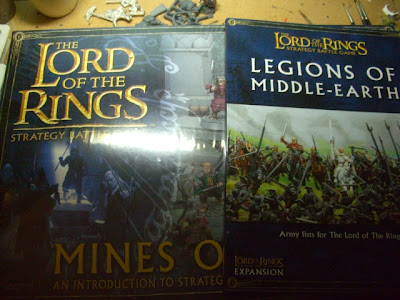 So, it finally came, and I will soon have my review on the boxed set along with my thoughts on the rules of the game - once I have read the "Rules Manual".
by Kuffeh At 1:17 pm 4 comments: Links to this post

Email ThisBlogThis!Share to TwitterShare to FacebookShare to Pinterest
Labels: LOTR

A Dwarfs Tale: From King to Clansman. Part IV - Cannon

So, I got hold of a base - the screaming bell one - and after some playing about with miliput I came up with the idea of making a small wall/defence to 'protect' the cannon.  I quite like it, I am hoping to do better with the Organ Gun. 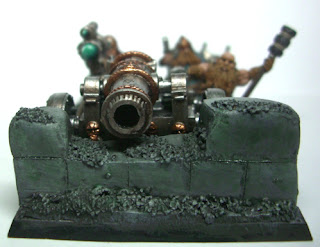 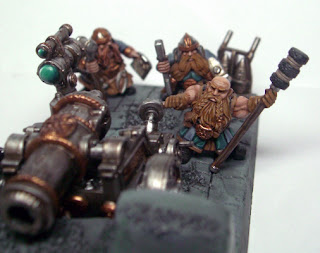 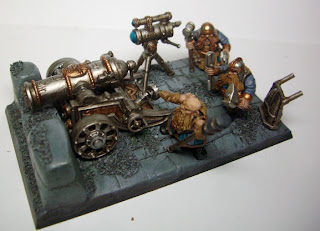 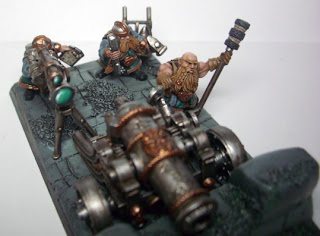 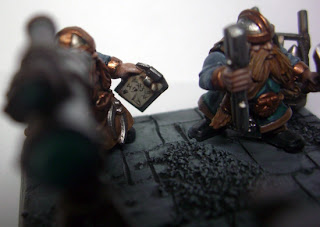 It has been a while, I know.  I have been working, painting and playing on Final Fantasy XIII.

I have almost finished my cannon, the minis are painted they just need basing.  I have ordered a Screaming Bell base, I think it is too big but I will see when it arrives.  I have also ordered more shields.

For the crew I tried out some brighter highlights, it worked quite well though they don't show up amazingly in the pictures as they were taken quickly.  I still need to work on my metallics, the cannon does not look that good.  Here are some pictures, once I get the base sorted I will add more and better ones. 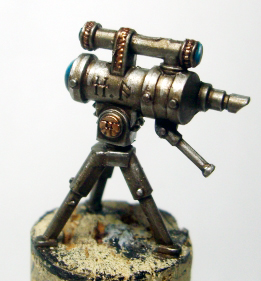 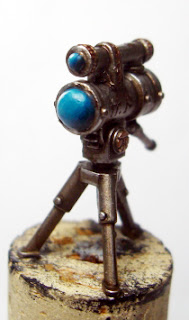 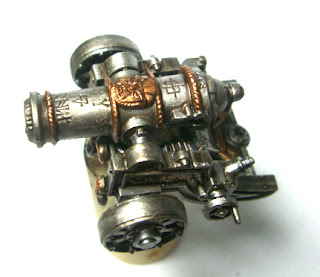 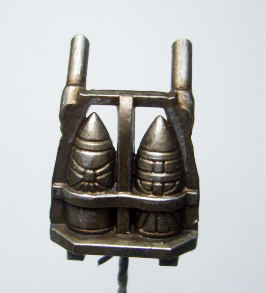 Email ThisBlogThis!Share to TwitterShare to FacebookShare to Pinterest
Labels: dwarf

The dwarfs are known for having the most well known book in the Warhammer world; The Book of Grudges.  There is one that the High King holds that encompasses the entire Dwarf race, but each dwarf city has their own books.  Thus, I think it would be fun and fluffy if it was an upgrade option.  Here is my idea:

The Book of Grudges
Of all races Dwarfs hold grudges the best, and take them so seriously that they have a book to keep track of these wrongdoings against them.  In times of battle the bearer of these books has been known to take to the field.  Held in his hands is one of the books, during the fight he bellows out the wrongs caused by the dwarfs opponents against them, whipping the Dwarfs into a rumbling hatred.

The Book of Grudges is an upgrade option for one Thane in a Dwarf army, at the cost of +50pts.

The unit in which the bearer of the book leads has the Eternal Hatred rule (hated lasts for all turns of combat), and in addition any dwarf unit within 6" gains hatred against all of the opposing army (normal hatred).

What do you think?  I was considering allowing him shieldbearers which would increase the range of the Hatred, maybe to 12"?  I don't think he's all that powerful really, and I don't know if he's too costly - 25pts or 50pts?
by Kuffeh At 11:37 am 2 comments: Links to this post

My thoughts on LOTR

I was wandering about the blogsphere and I remembered this post over at Cursed Treasure about why the Lord of the Rings games lacks gamers.  I viewed the comments and there were many interesting points raise, and I felt like addressing my thoughts on these points.

To start, I thought I would drop my thoughts on the original posted question.  Why don’t I play LOTR?  I have been thinking on this, and I think I fell into the same pitfall of most people.  When the game was announced it was on the back of the film trilogy, and GW just seemingly threw it in the face of gamers proclaiming it to be their third ‘Big Game’ alongside the ancient Warhammer Fantasy and its younger brother, Warhammer 40k.  It just didn’t sit right with me.  To me a game becomes popular by the gamers and supporters, not because the company ‘Says so’.  However, up until early this year I had never even read the rules to the game.  I unfairly judged the game, just like pretty much every other gamer.  I jumped right on the band wagon of “this game sucks” and grabbed the tail of the “its stealing time and space in the company” donkey.  I think it also came down to the idea of how GW first pitched it.  It was seemingly marketed to begin with as just a way of replaying the famous parts of the novels/films, seeing if you could change the outcome of the series.  This worked while the films were new and interesting, but as they waned, the idea stuck that this system was limited.  We all know the outcome of the game, and all know that nothing changes when we replay these ‘famous’ events.  I think this was a big pitfall for me.  I like games that have wider range and its ending is not set in stone.

There was also a point brought up in the comments above about lack of customisation, and I agree.  The other two ‘big games’, and even the spinoffs, are very open ended.  You can pick a generic hero for you faction and fashion a whole history for them, arm them how you wish and let them grow.  In LOTR, most characters are known and even then if you can take unnamed ones you can’t really make them a great hero of their faction because Tolkien’s world is very set and lacks any great manoeuvrability for this purpose.  So instead you end up with characters leading factions, but from what I understand race doesn’t matter.  By this I mean, you could have a dwarf character leading elves or visa versa because they are in the ‘good’ faction.  You can have northern orcs being led by evil southern men. And so forth.  It just seems a little bit like having your cake and eating it, leaving very little to skill or having flaws in the force if you can just take other models to fill in those gaps.   One other thing, it kind of goes hand in hand with the lack of customisation comments above, the heroes, or the models in general, they give you little freedom when it comes to equipment - as far as I can tell.
My final negative point here is the scenarios.  I have nothing against scenario wins, except when they are “if X faction does achieve Y criteria they win.  If they do then Z wins”.  These bore me and strike me as one sided.  However this isn’t my gripe, as I am sure there are different ways to play the game, but it is rather how GW marketed them.  The whole “replay the LOTR and win for evil” etc is fine, but has limited appeal.  This is something I feel has put a lot of gamers off picking up the rules and actually having an opinion that is not just built off of instant dislike or hearsay.  I think win games people like the idea of it being set in a well known surrounding (LOTR, or Star Wars for example) and refighting these epic battles are interesting but after a while, it gets boring and you need more exciting things to do with your minis rather than replay these scenes.  I am sure there are more scenarios and more varied ones available to play, but how GW made them come across has always seemed like there was just the replaying of the story.  Not fun.

So what does this all mean?  Well… I am going to put my money where my mouth is.  So to speak.  I intend to buy the LOTR: SBG rules and have a read of them, to see what my real thoughts on the matter are.  I have read them before, but I want to re-read them.  This does not mean that I’ll be starting up a force for the game (though, I have already considered some options already) but I will definitely read and comment back with actual opinions based on fact and discuss my thoughts on the topic of the game itself.  Look forward to this in the future.
by Kuffeh At 10:29 pm 10 comments: Links to this post