I totally forgot I had something to update from the dwarfs.  Alsa, I will not be able to touch it until after Christmas as I am currently home from uni.  I did however manage to make a couple of heroes, though they have some faults. 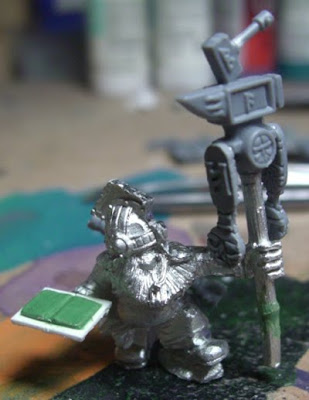 This is my Runesmith.  I wanted a unique looking hero, so I used a mini from the Mordheim Treasure Hunter box set.  The book is plasticard, but does look a little bit flat - I hope to alter this with painting, or maybe adding a few more 'pages'.  His staff I have had trouble with.  I couldn't get the join to look smooth, its too obvious.  I might have another go at it when I get a chance. 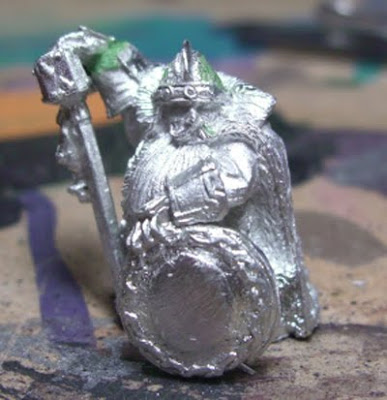 This is my thane.   He's from a box set of thane + BSB.  I chose to remove the big feathers and the shield boss, as I liked neither.  Instead I plan to paint the hold's symbol on the oval.  The helmet looks OK, I may have to have another go at filling in the gaps for the 'wings', but I'm happy overall.
The Trading Post Blog

I would like to make a little note about my other blog, the Trading Post.  Its quite at the moment, mainly because I don't have much to add - unfortunately.  Should you want to add to the blog, or have your blog added to the blog roll then please email me on thetradingpostblog@googlemail.com.
You'll also notice a small icon on my blog to the right, please feel free to add it to your own blog.
I was also considering doing a sort of collaborative post, the idea being "New Year Resolutions".  Only fantasy and hobby related though.  If you this idea, make a post before the New Year and send me a link to it on the above email address
by Kuffeh At 11:39 pm No comments: Links to this post

Dwarfs and what's to come.

Right, so uni is almost about to have its Christmas break and I have managed to spend some time doing something other than uni work over the last few weeks (ish).  I have some dwarf quarrellers to show first of all.You might have seen previously the green bases I used.  Following this I decided to make stamps from them, and it worked pretty well.  Next I needed to make twelve bases.  This would have used an awful amount of greenstuff, so I used milliput instead.  Didn't need much off it, dried overnight and actually had enough to do sixteen bases.  Here are some pictures: 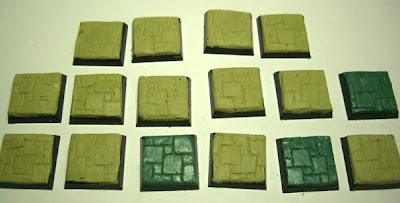 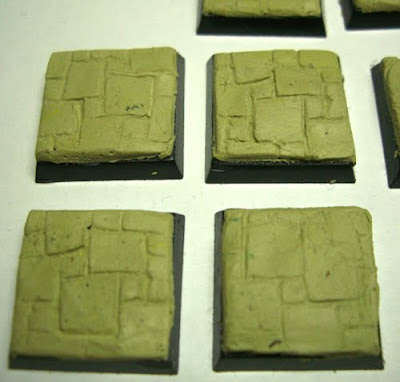 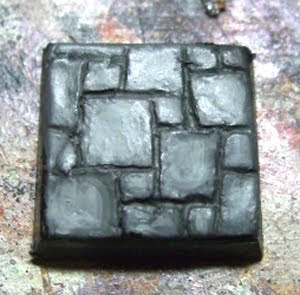 I'm not amazingly happy about the grey stones.  I was unsure how to highlight them and they are a bit rushed, as you'll see in the picture.  But, it looks OK.

Now.  On to the dwarfs.  I ended up with twelve quarrellers in the end, with shields.  The pictures have once against changed the turquoise to green (still no idea why it does this), but you'll get the idea of how they look.  I don't plan to use the shields GW made them with as I dislike the embossed symbols.  Instead I am hoping to use the older shields, minus the boss, and hand paint on my army's runic badge.

So,  I have two challenges. 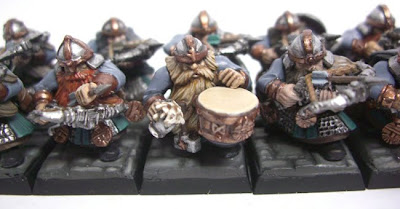 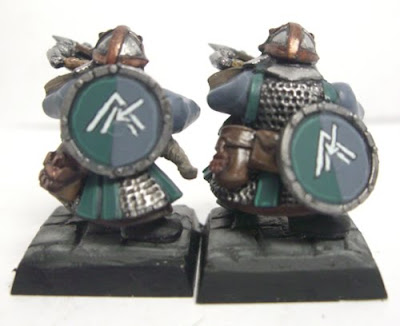 If you know these, or can get close to them, well done.

So, that is my dwarfs done with.


I also have more to add.  Some plans.  I have seen these used on blogspot blogs, so figured I'd do the same.  I have built a small selection - between 500 and 600pts - for each of my proposed armies and made a little picture of them.  So I can keep track of what is being painted and how far through them I am.

I haven't included much details, I just want to get basic items down, rather than getting bogged down in magic items/wargear. 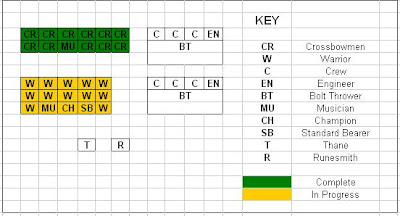 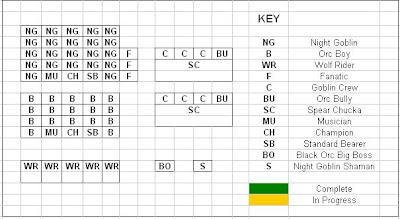